IPVanish Review (What is a Tier-1 VPN Anyway?)

VPNhub Review: Is it Any Good?

ExpressVPN Review: Does it Live Up to the Hype?

This in-depth review of ExpressVPN examines whether it really meets up to all the hype as being the best VPN service for virtually all VPN uses. 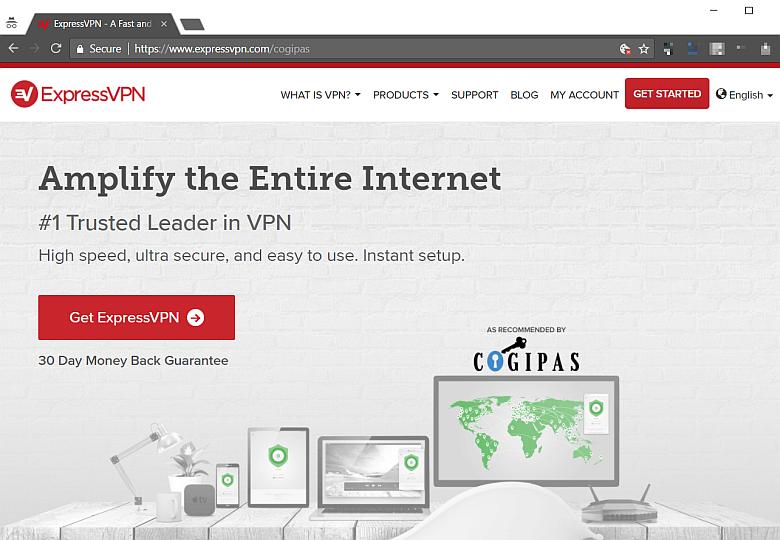 Does ExpressVPN really deserve to be rated as the top #1 best VPN service?

So, you’re in the market for a new VPN, and ExpressVPN caught your eye. You have probably seen it mentioned almost everywhere as the #1 overall VPN service and you’re wondering whether that's too good to believe or even true or not.

Well, that’s a good question. We started out being very skeptical about ExpressVPN, but are now true believers. Yes, it really does check all the boxes and meet up to all the hype. Keep reading to find out why.

Index
Why Everyone Needs a VPN
ExpressVPN Review 2018: Is it Really "All That"?
Summary of ExpressVPN Positives
Summary of ExpressVPN Negatives
A Breakdown of ExpressVPN's Benefits and Features
Excellent Speeds
Longest & Best VPN Guarantee
No Leaking of Your IP Address
No Logging
Strong Support
Safely Located Outside USA and Europe
Plenty of VPN Servers
All the Advanced Features You’d Expect
Still Works with Netflix (But Read)
Conclusion

Why Everyone Needs a VPN

Before we get into the details of our ExpressVPN review, let’s be clear here: everyone should use a VPN, whether you only casually use the web for activities such as email, social media, and banking or whether you’re a full-blown Internet addict (like us).

There are simply too many people out there trying to get a hold of your data and use it against you.

The privacy, security and peace of mind provided by a VPN are definitely more the reasonable price of a VPN subscription.

In short, you owe it to yourself to grab a VPN, whether it’s ExpressVPN or another top VPN service.

With all of the other choices out there for VPNs (there are almost 200 VPN services on the market today!), why choose ExpressVPN?

Let's weigh the pros and cons.

On paper, ExpressVPN looks like the ideal VPN service because it ticks all the right boxes you want from a VPN. Here's what we mean:

Wow. OK, so that's nice in theory but how does it work in practice?  Like a dream in our experience. Seriously.

OK, but wait. Does ExpressVPN have any weaknesses, you might be asking?

Nothing in life is perfect and ExpressVPN could improve in these areas:

A Breakdown of ExpressVPN's Benefits and Features

With that handy summary as an introduction, let's highlight in more detail some of these elements.

ExpressVPN has always had a reputation as one of the faster VPNs in the business. It usually ranks near the top of any ‘fastest’ list, no matter which site or reviewer is doing the ranking.

ExpressVPN tested for speed by Comparitech (select to enlarge).

If you’ve got the need for speed (or you just like fast downloads), ExpressVPN is definitely one of the better options. You won’t see much drop off when you’re using it compared to your normal Internet speeds.

ExpressVPN offers a 30-day money back guarantee, which is pretty rare in the VPN world.

If you don't like it for whatever reason, request a refund and you'll get your full money back with no fuss.

ExpressVPN does not offer a "free trial" like some VPN services, but with that long of a full money-back guarantee period, what ExpressVPN offers is better than a free trial.

No Leaking of Your IP Address

Independent tests confirm that ExpressVPN does not suffer from leaks.

See the test results for ExpressVPN for yourself on page 6 of AV-TEST's report on VPN services:

When ExpressVPN had one of its servers seized by the Turkish government, ExpressVPN's "zero-logging" claims were put to the test.

Sure enough, the Turkey authorities were not able to find any logs on the server and ExpressVPN's customer's true identity was unknown. Read more about proven VPN no-logging claims.

Another area where ExpressVPN has established a solid reputation is their customer service. They definitely don’t skimp in that regard.

Not only is their support good but it’s also available 24/7, around the clock, meaning they’ll be there when you need them.

This is an important consideration for users that are new to VPN services or even intermediate users who want to use their VPN for things like Netflix geo-shifting or to access the Internet in places such as China, UAE, Iran, Saudi Arabia, etc. as you may often need the help of your VPN’s customer support to stay ahead in these games of cat and mouse.

Safely Located Outside USA and Europe

In the case of ExpressVPN, they’re located in the British Virgin Islands (or BVI for short), which is definitely a good thing when it comes to your privacy. Don’t let the name fool you. The BVI are outside the jurisdiction of Britain, with Internet and data collection laws being a lot less intrusive. Plus, the BVI’s privacy-friendly laws are also less likely to change for the worse in the near future – in contrast to places like the US, UK, Australia, and the rest of Europe – since they generally receive less scrutiny.

ExpressVPN’s location in the BVI is off the snoops’ radar and that’s a good thing for your privacy. That makes your activities and your data that much safer, especially for sensitive online activities.

The fact that ExpressVPN is located in BVI and keeps no logs of your VPN activities will appeal especially to people who want to be anonymous when torrent p2p file-sharing.

That’s one of the best spreads in the industry, and it means you’ll almost always be covered, no matter where you are in the world. It’s even a great option in China, for example, where other VPNs struggle to crack “The Great Firewall”.

That also makes ExpressVPN a good choice for people who are in countries where other providers don’t have servers.  To use Private Internet Access as an example, they are cheaper than ExpressVPN, but have servers in only 77 countries, meaning you have lots more options and choice with ExpressVPN.

All the Advanced Features You’d Expect

ExpressVPN also boasts all the leading features we demand from a VPN these days including:

Furthermore, ExpressVPN provides its customers with access to a full suite of web browser extensions (including for Chrome, Firefox and Safari). The Chrome Extension in particular also now features HTTPS Everywhere.

It's no secret: we use our mobile devices to access the internet now more than ever.

In fact, roughly 50% of ALL web traffic is from mobile devices, with smartphones obviously leading the pack. From reading email to browsing social media to checking our bank account balance, we do it all – and more – from our Android or Apple (and sometimes Windows) handheld.

But are you protected at those times? Unless you're using a good VPN, the answer is simple: no.

That's why it's so important to have a solid provider, like ExpressVPN, that has functional, easy-to-use apps for your mobile OS of choice.

ExpressVPN has even started to introduce new features, like Protection Summary, which will show you how much time you've spent on your Android device protected vs. unprotected per day and week. And it'll also verify that your IP address is currently hidden when you're connected through the VPN.

They're promising even more new security and privacy features for Android in the coming months, and hopefully we'll see iOS users get some love too. If so, ExpressVPN may just become the outright best VPN for mobile users.

Still Works with Netflix (But Read)

Netflix has been successful at blocking most VPN services but a handful, including ExpressVPN, keep managing to overcome the block.

If you are running into any difficulties, try switching servers in the same country. For example, ExpressVPN has no less than 29 server locations in the USA, 6 in the UK, 3 in India and 4 in Canada. Cycle through servers until one works.

You can always jump onto ExpressVPN's 24/7 chat support and ask for a server that is currently with Netflix. They will be happy to oblige.

OK, so our verdict on ExpressVPN is pretty clear: a resounding YES. It meets the hype, not only on paper but in everyday use too.

We’ve outlined above where ExpressVPN stands out. They offer great speeds, the best guarantee in the business, strong customer support, a safe location and a big VPN server footprint.

ExpressVPN is the closest thing we have seen to a one-size-fits-all VPN service. It is well worth its affordable monthly subscription.

With 30 days to try it, you can do your own ExpressVPN review.