VyprVPN for Torrenting (& More) – Is It Safe?

By adopting a 100% no-log policy, VyprVPN becomes one of the best VPNs to use for safe torrenting. 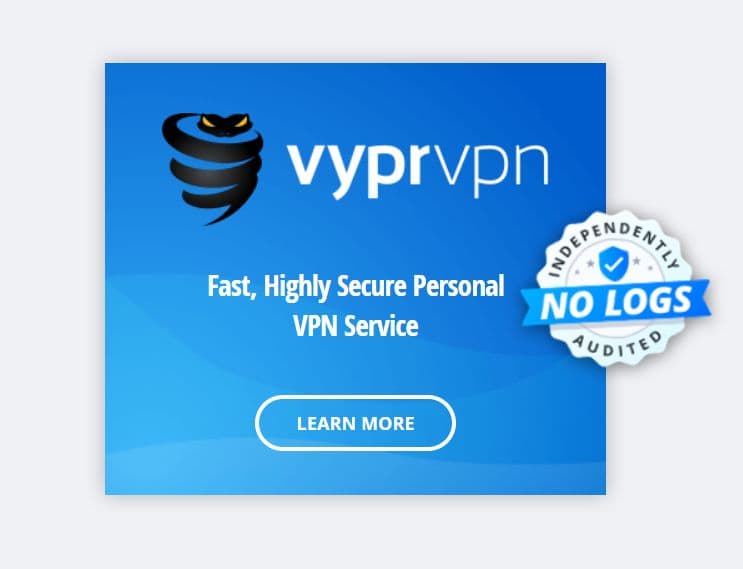 VyprVPN is a safe VPN for torrenting thanks to its no log policy being verified by a public audit.

VyprVPN is a premiere VPN service from the good folks at GoldenFrog which has a stellar reputation in the industry and has always been known for being a very honest VPN.

But does VyprVPN now have what it takes to put them among the best p2p VPN services on the market? Let’s find out.

Index
VyprVPN's Plans & Pricing
Safety, Security & Privacy
An Absolutely No-Log VPN Service
Importance of Audited No-Log Claims
VyprVPN Free Trial
VyperVPN Review: Where it Stands Out
Great Apps for Nearly All Devices
Even More Great Features
VyprVPN Supports Torrent File-sharing
Fast Download Speeds
VyprVPN Server Locations
First-Party Software and DNS
VyprVPN Has your Back and has Proved It
Solid, Round-the-Clock Support
VyperVPN: Where it Could Improve
Not the Cheapest VPN But We Have a Deal for You ...
No Anonymous Payment Methods
Wrap-Up: VyprVPN = Safe Torrenting

VyprVPN keeps it simple, with a single Premium plan with cheaper pricing the longer your subscription.

It's not the cheapest VPN on the market, but when you examine what you get with your subscription, we think you'll agree that it is excellent value for money.

Whatever length of subscription you choose, VyprVPN has the following features to keep you safe when torrenting:

The big news - especially for fans of torrent file-sharing - is that VyprVPN is the world’s first publicly audited no-log VPN service.

In the past, VyprVPN used to log a minimal amount of VPN service data purely for improving speed, performance, reliability and troubleshooting, and kept the logs for only 30 days.

This old policy used to keep many customers away. You will see this old logging policy mentioned in old, out-of-date VPN reviews and Reddit posts (like this one). In those days, you would quickly receive warnings from DMCA take-down requests.

VyprVPN doesn’t log anything on any of its VPN platforms, Windows, Mac, Android or iOS. 🙂

Unlike most other VPNs, VyprVPN doesn't expect you to take their word for it.

Not only did the audit verify that VyprVPN keeps no-logs, it also makes VyprVPN the first publicly audited no-logs VPN ever.

The full, public results of their 28-page audit can be found here, but we quote the bottom line, “As a result, [VyprVPN] can provide VyprVPN users with the assurance that the company is not logging their VPN activity.”

This means VyprVPN joins the ranks of zero logs VPN services that engage in no logging whatsoever.

Hopefully, this pushes other VPNs to follow suit with audits of their own. That would definitely be good news for the VPN industry as a whole.

If you’re not sure whether VyprVPN is the right VPN for your needs, you can take advantage of the 3-day VyprVPN free trial.

This lets you fully try it before you buy it.

How it works: you will not be billed until your trial ends. If you are unhappy for any reason, just cancel your account within the 3-day period and you will not even be billed. That's a true risk-free trial.

Try VyprVPN for 3 Days with No Risk »

VyperVPN Review: Where it Stands Out

There were some things we really liked about VyprVPN; let’s start with those:

Great Apps for Nearly All Devices

VyprVPN has an app for nearly every device - Windows, MacOS, Linux, Android and iOS.

All the VPN apps were recently updated in preparation for VyprVPN's big move to no-logging and are very well designed.

For example, unlike many others VPN apps, VyprVPN displays the protocol & encryption in use, real-time speed and current IP address right in the app's main display.

Both the one-click connect (to choose the fastest server at any given time) and manual server selection modes work flawlessly.

VyprVPN does take a second or two longer to connect than say Private Internet Access or ExpressVPN, but that's being a bit picky.

"Chameleon" is VyprVPN's name for a cloaked form of OpenVPN 256-bit encryption that allows you to disguise the fact that you’re using a VPN, which can help bypass VPN blocking and bandwidth throttling.

VyprVPN considers this particularly useful in places like China and Iran, where the government regulates Internet traffic, but it also comes in handy with certain Internet service providers and being able to access some censored content.

But that's not all!

VyprVPN has other useful features to enhance privacy and security including a NAT firewall, a kill switch, DNS leak protection.

It also gives you the ability to choose from multiple levels of encryption and protocols including L2TP, PPTP, OpenVPN, and Chameleon.

By now this is obvious but it's still good to cover it.

VyprVPN is happy to have p2p file-sharing customers. VyprVPN's support of torrent file-sharing is stated in black and white on its website.

Now that it is 100% non-logging, VyprVPN cannot link you to any of the activities you do while connected to VyprVPN. Not torrenting, not streaming, not web browsing. Nada. 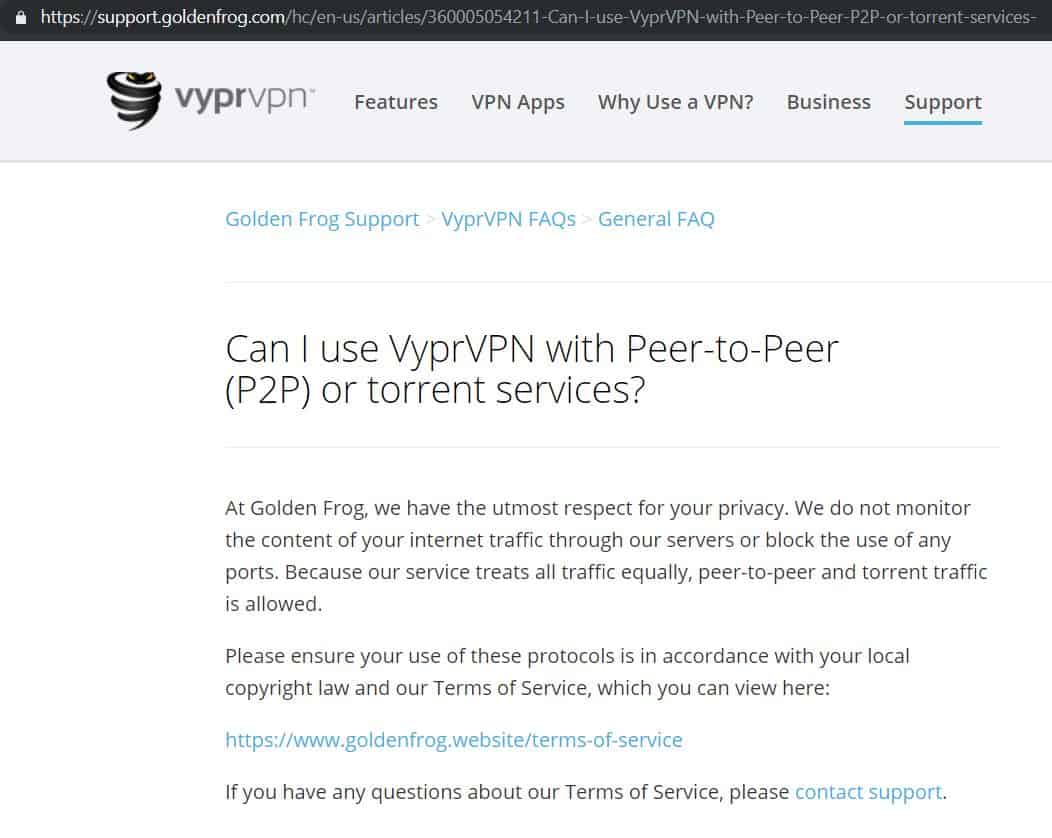 So, if you want the best torrent protection from your VPN (in case, for example, you accidentally download copyright material), VyprVPN is now an excellent choice as a torrent VPN.

While all VPNs are going to slow down your Internet connection to some degree, some are a lot better than others.

And VyprVPN falls into that ‘better’ camp, as they manage to minimize latency issues and achieve download speeds that are faster than a lot of their competitors.

While we wouldn’t go so far as to call them the fastest VPN we’ve used, they’re certainly among the faster options, especially at their reasonable price point.

VyperVPN provides users with servers in an impressive 700 countries, with 700 servers and 200,000+ IP addresses. 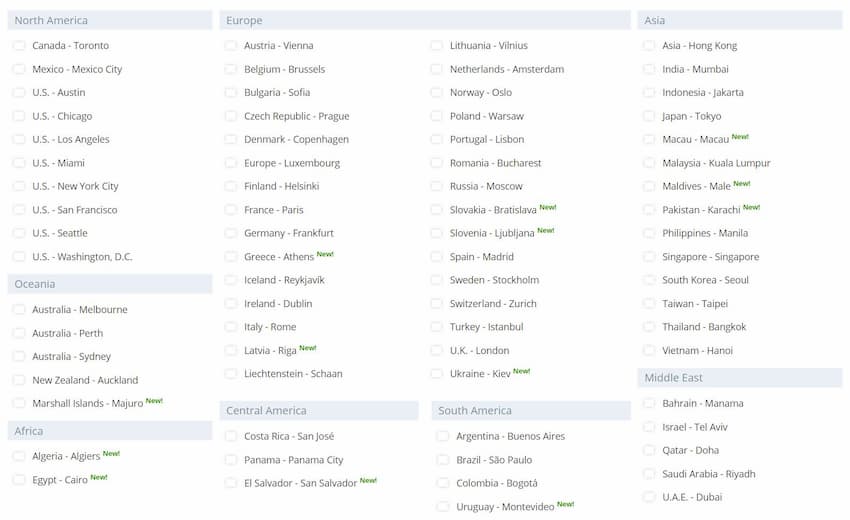 VyprVPN has lots of server locations to choose from.

VyprVPN's server footprint includes areas like the Middle East and Northern Africa, which are too often ignored by other VPN providers.

But why are lots of servers a good thing in the first place? For starters, they make sure users around the world – including frequent travelers – can access servers that provide good latency and speeds.

And of course, a large pool of IP addresses is great for security and anonymity, which is one of the biggest reasons we use a VPN in the first place.

VyprVPN uses all first-party hardware and software, from their code to their VPN servers to their DNS to their network as a whole.

Very few VPN providers can make that claim. It means that VyprVPN is able to provide better speeds, more reliability, and stronger security for their users across the board.

VyprVPN Has your Back and has Proved It

It is worth noting that the company behind VyprVPN, GoldenFrog/Giganews, is legendary for protecting the interests of its customers.

It has put its money where its mouth is and has battled snooping trolls, including coming out on top protecting its customers in court cases.

VyprVPN is legendary for protecting its customers

Did you run into a snag at 2 am Monday morning? No problem, because VyprVPN offers 24/7/365 support, including a live chat feature.

In fact, it claims that it can resolve most issues in about 10 minutes.

VyperVPN: Where it Could Improve

Okay, so we gave you the rundown of what we like about VyprVPN. Now it’s time to take a look at the areas where they could be better.

Not the Cheapest VPN But We Have a Deal for You ...

At its normal price of $12.95 per month (even for 5 simultaneous connections), VyprVPN definitely isn’t the cheapest provider on the market, especially compared to another leading VPN like NordVPN which charges only $3.49/mo.

Luckily, you can take advantage of our special deal and get VyprVPN for only $2.50/mo for a 2-year subscription.

Just remember that VyprVPN has a strict no refund policy, so make sure you thoroughly test VyprVPN for the free trial period and confirm it's the right choice for you.

At this time, VyprVPN does not accept anonymous payment methods, like Bitcoin.

This will only put off the most hardcore privacy advocates who worry about any link between their personal details (via the credit card or PayPal details on file) and their Internet activity.

If you want to achieve this level of complete and total anonymity by paying for a VPN with Bitcoin or gift ​​cards, you'll have to look elsewhere.

This may not be something that all users may care about, but it’s something we at Cogipas always like to have the option for.

VyprVPN had always been a powerful VPN, with some great features and a transparent, privacy-oriented team. For instance, VyprVPN is the only VPN service that uses all first-party software and servers.

In the past, their logging policy was the one thing holding them back as a torrenting VPN. Although they used to keep minimal logs of user activity to improve VPN functionality and VyprVPN continually earned kudos for their honesty in disclosing their practices, torrent users stayed away.

But now with its no-log policy tested and verified by a comprehensive audit, torrent users can be confident in using VyprVPN for safe torrent file-sharing.

File-sharers will love VyprVPN for its reasonable prices, excellent privacy & security features, good speeds, and solid support.  VyprVPN now has a great package going for them.

Of course, you can’t lose with their 3-day free trial, so we recommend giving VyprVPN a try today as your new torrent p2p VPN.

[…] However, there’s no guarantee of this so it doesn’t hurt to hedge your bets and take a monthly package with VyprVPN in case Netflix eventually catches up with this VPN provider too. The big yearly discount is tempting and worth it if you will use Vypr for other online activities such as torrenting (see our VyprVPN Torrenting Review).  […]