If you are a gaming maniac, Outfox may be just what you need to gain a competitive edge over your fellow gamers. It reduces lag and lowers ping for your favorite online games. Now in beta, so sign up FREE! 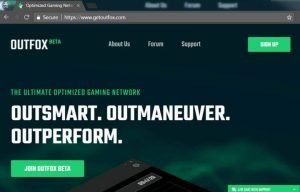 Does the Outfox gaming network live up to its hype?

When it comes to online gaming, every millisecond counts. Because even a moment of lag can be the difference between winning and losing a match in League of Legends, or turn that perfect Overwatch headshot into a miss.

Don’t leave your teammates frustrated or tempt your opponents to call you a n00b.

But what exactly causes lag in the first place? It’s often poor latency and high ping. In fact, as long as your Internet speeds hit a pretty reasonable baseline, latency and ping are the two biggest factors in your gaming experience.

Ping and Latency: What are They?

If you’re a veteran gamer who knows all about ping and latency, you can skip this section.

But for those of you who need a little refresher, latency is how long it takes for your computer to communicate with a server. In our case, we’re specifically concerned with the online video game’s server.

And ping is simply the measure of this latency in milliseconds (or “ms” for short). An ideal ping for online gaming would be under 50 milliseconds and around 50ms is still very good. A bad ping is when you start creeping close to or get over 100ms.

Once you get to around 100ms or higher, lag starts to become very noticeable and create significant disadvantages in competitive games. For example, if you have 100ms ping, a player with equal skill and a much lower ping is going to kick your butt every time.

You can pull your triggers at the same time, but not only will they shoot first, they may kill you before the gaming server has even registered your shot!

Ping and latency are controlled by a few factors, most importantly your distance to the server and the server’s traffic or load. For instance, (in most cases) a player in Europe will have better ping playing on an East Coast US server than a West Coast one, while a player in Australia will have the opposite experience.

Fortunately, most popular online games have servers all around the world, but that still may not be enough. And of course, you can be close to the server and still have high ping if there’s high server traffic, load, low bandwidth, or other problems.

Outfox gives gamers a way to improve their latency, ping, and connection, despite any limitations of your Internet service provider, location, and a game’s servers. 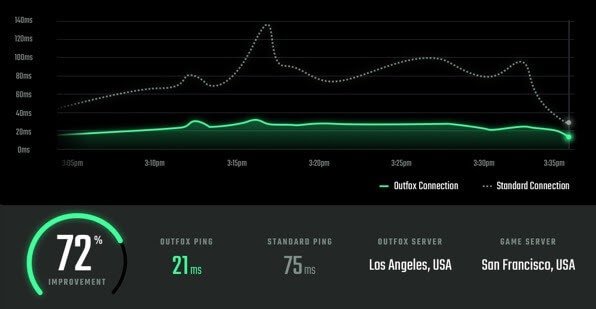 Outfox' optimization technology is sure to improve your gaming experience

Okay, so how exactly does Outfox lower ping and improve your game performance anyways?

And the faster your traffic communicates between your PC and the game’s servers, the less latency you’ll have.

Can Outfox’s Claims be Trusted?

Yes. The folks behind Outfox are GoldenFrog, the same group behind both Giganews Usenet and VyprVPN, leaders in both of these highly competitive online industries.

In other words, they know a thing or two about maintaining a fast, optimized, global network or servers and connection for finicky customers. How long have they been doing this? For, oh, only about 20 years now.

What Games Does Outfox Support?

As of now, Outfox offers support for these games:

Outfox is always adding more supported games so keep an eye on the updated information at https://www.getoutfox.com/support#what-games-does-outfox-support

Where Does Outfox have Game Servers?

Outfox has servers in:

Servers are being added all the time, so check the always up-to-date list of server locations at https://www.getoutfox.com/support#where-are-outfoxs-servers-located

If the game you want to play isn’t supported yet, then obviously Outfox isn’t going to be much help. But if you want to play one of the included games, it’s definitely worth a shot (pardon the pun).

And that’s true even if you’re not particularly close to any of the servers. That’s because Outfox’s server optimization alone may be enough to give you a boost, and its servers may still be closer to you than the game’s servers.

In fact, don’t always assume that the closest server to you will always be the fastest. Outfox gives you the option to choose a specific server yourself, or to choose the ‘Fastest Server’ option. We recommend this auto option which will automatically connect you to the server with the best performance for you personally. This functionality will probably be familiar if you’ve used a VPN service, including Golden Frog’s VyprVPN.

Our Thoughts on Outfox So Far

As of right now, Outfox is just out of alpha, meaning they’ve just recently worked out the kinks and started expanding the service. Just in the past couple of weeks, they’ve added new games and servers.

But so far, they do seem to be headed in the right direction. When using the service ourselves (from the Eastern USA), we experienced a noticeable improvement in our latency and ping. We hope to see Outfox get bigger in the future, as they add to their servers and game portfolio.

On the negative side, Outfox is only available for the Windows operating system, from versions 7 and up. And it only works with 64-bit versions. Most serious gamers won’t be affected by this, since 64-bit Windows is the go-to for the best gaming performance to date, but perhaps they’ll add support for 32-bit Windows and Mac and even Linux users in the future.

We’ll be sure to keep you updated as Outfox develops, or given them a try now!

How to Install Adblock on Your Router