That Android phone sitting in your pocket is in reality a remarkably powerful, Internet-connected computer. It can do things that just a few short years ago required a full desktop PC. And unlike Apple with its closed eco-system, one of the coolest things you can do is download torrents.

PRIVACY ALERT!   Stay private & safe while searching, downloading and sharing your favorite torrents. NordVPN is completely torrent-friendly, keeps no logs, has fast download speeds and is inexpensive, at 70% off for just $3.49/mo - act now!

So How do I Torrent using Android?

If you don’t know how to torrent (especially using Android), here is a quick guide to get you started.

1. Download and install a BitTorrent app. Although the desktop version is somewhat bloated, the Android Vuze Torrent Downloader app is lightweight and ad free (something that cannot be said for the µTorrent app!).

3. Your BitTorrent app should automatically open and start downloading your content. Enjoy! Note that for watching video content, VLC for Android and BSPlayer will play just about anything you might throw at them.

The BitTorrent peer-to-peer protocol is a fantastically efficient way of sharing files with others users – be they music files, movies files, or program files. And because file-sharing occurs over a decentralized distributed network, it is extremely difficult for anyone to put a stop to it.

The only problem is that the way the BitTorrent protocol works also makes it very easy for online snoops to track down individuals downloading torrents. This is because… well, the clue is in the names P2P and file-sharing, really. Rather than downloading files from a centralized server, they are shared among everyone else who is downloading the same file.

This makes it ridiculously easy for snoops to monitor who shares and downloads files, as everyone who downloads a given file can see the IP address of everyone else who downloads that file!

So What Can Happen?

In most places (but not all), downloading certain content can be regarded as a civil rather than a criminal offense. This does not, however, mean that you can’t get into trouble:

Speculative invoicing is now by far the common response, and is often carried out by specialized legal firms known as “trolls.” If you are ever targeted in this way, check out the Speculative Invoicing Handbook (PDF download), and the British government’s official guidance. Although both documents are aimed at a UK audience, the advice they contain should also be useful to residents of North America and Europe.

How to Protect your Torrenting on Android

Experienced desktop downloaders should already be aware that the best way to protect yourself while downloading is to use a VPN. The great news for anyone wishing to torrent on the move, is that the same advice holds true on your Android device. Almost every VPN provider supports the Android OS.

A VPN will protect you when torrenting because:

Using a VPN is also useful for connecting to torrent sites, as these are blocked in many countries. To access blocked torrent sites, simply connect to a VPN server located in a country where they are not blocked. This consideration is especially important in many European countries.

If torrent websites are blocked in your country, then the Netherlands, Switzerland, Sweden, Romania, and Bulgaria are all great choices when choosing a server to connect to.

Please be aware, however, that not all VPN providers permit torrenting. If you torrent using a VPN that doesn't allow torrenting then you are at risk of having your VPN account terminated without notice, and may even find that your details have been forwarded to snoops in response to complaints or requests for information. So check first!

The good news is that any VPN provider that permits P2P torrent file-sharing is basically agreeing to shield you from snoops. This promise can be trusted because it is part of their business model, and failure would likely be disastrous for their reputation and pocketbooks.

Support for Torrenting on Android

VPN providers support Android devices in one (or more) of three ways:

Android natively supports the PPTP and L2TP/IPsec VPN protocols. These are fairly easy to configure, and require no additional software to be installed on your device. Most VPN providers offer step-by-step setup instructions for one or both of these protocols.

If torrenting is your only reason for using a VPN on your Android device, then these setups may be sufficient for your needs. If you also use a VPN to provide security and privacy, however, then you should be aware that PPTP is very insecure. L2TP/IPsec is much better in this regard, but has weaknesses. OpenVPN is widely regarded as the better option.

OpenVPN is the industry standard VPN protocol for good reason. Although it is not native to any operating system, it can be deployed on all operating systems via apps. If properly implemented (i.e., using strong ciphers and Perfect Forward Secrecy), OpenVPN is also believed to be resistant against even the NSA.

OpenVPN was developed as an open source project, and two excellent free and open source (FOSS) OpenVPN apps are available for Android. These are OpenVPN Connect from OpenVPN Technologies, Inc, and OpenVPN for Android by Arne Schwabe.

These apps use standard (desktop) OpenVPN certificates, and can therefore be used with any VPN service that supports OpenVPN (almost all of them) – even if this is not explicitly mentioned.

These apps are so good, in fact, that many providers are content to support Android by simply providing setup guides for using them with their service. This setup is not hard (basically install the app and download the OpenVPN certificates), but is a little more involved than configuring PPTP or L2TP/IPsec.

It is increasingly common for VPN providers to offer custom Android VPN apps. Unlike custom iOS apps (which use IKE and IKEv2 in order to comply with Apples official developer guidelines), these Android apps almost always use OpenVPN.

The main advantage of custom apps is that they require zero configuration. Download the app, sign-in, select a VPN server, and you are good to go. Custom desktop apps often have useful bells and whistles such as advanced encryption options, kill switches and ‘scrambling' (obfuscation) features.

As more and more people shift away from desktop PCs, and rely on their mobile devices as their primary means of accessing the Internet, we can expect to see more emphasis on advanced Android VPN apps in the future.

Kill Switches Help Protect your Torrenting on Android Too

A VPN will protect you when torrenting, but what happens when the VPN goes down? This is an even bigger problem on mobile devices than desktop PCs (where it still happens), because with a mobile device you regularly switch internet connection between mobile and WiFi networks, and between WiFi networks. If your VPN connection goes down, but your torrent app continues to download, then your IP address will be exposed for all the world to see…

Desktop VPN apps often solve this problem by including a “kill switch”. This either shuts down your internet connection when it detects that your VPN is not running, or (better) uses a firewall to ensure that no internet traffic is possible outside the VPN connection.

As already noted, the Private Internet Access and IPVanish VPN apps are the only ones that we are aware of to include a full-fledged kill switch. However … it is possible to configure the open source OpenVPN for Android app to work as a very effective kill switch! It will even reconnect back to the VPN when you move between routers and WiFi etc.

1. In the OpenVPN for Android app, go you your VPN server settings page (pencil icon).

2. Go to the “Routing” tab and ensure that “Use default Route” is selected for both IPv4 and IPv6. This ensures that all internet traffic only passes through the VPN when the VPN is running.

3. Go to the “Advanced” tab, the check “Persistent Tun”, and set “Connection retries” to Unlimited.

You now have a kill switch for Android! 🙂

Torrenting on your Android device has never been easier or more rewarding. The key thing to remember is that all the dangers of torrenting on your desktop also apply to your mobile device, so to stay safe it is vital to use a trusted VPN supporting torrenting on Android at all times. 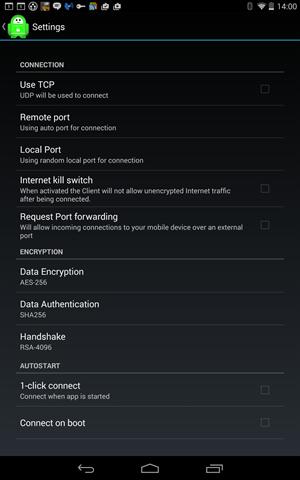