Our XSNews review reveals a solid, value-for-money Usenet provider which gets even better with our special XNews coupon offer. 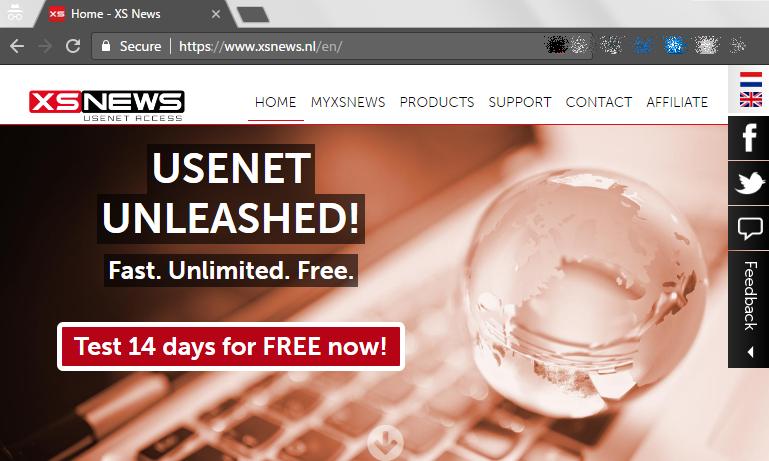 Grab an XSNews coupon for a great Usenet deal

XSNews has been around for a while, and in that time they’ve earned a reputation as one of the best and fastest Usenet providers in Europe.

But is it justified? How do they stack up against other European providers? And how do they fare compared to services across the pond?

Don’t worry, because we’ve got the answers to these questions and more. Keep reading.

Whether you’re a prolific downloader or an occasional Usenet user, there’s definitely an XSNews plan to suit your needs.

XSNews was smart enough to offer users six different plans to choose from, including three monthly plans and three blocks plans. Here’s what they look like.

XSNews also provides discounts when you prepay for 1 or 2 years in advance, bringing their Elite plan down to €8,20.

Top Tip - For a limited time, if you enter XSNews coupon code COGIPAS when you sign up, you’ll receive an extra 30% off your bill. That brings a yearly subscription to their Elite plan down to an incredibly low €5,74 per month, or just over $6.

Lock in this XSNews Deal Now! »

If you want to give XSNews a spin before you commit, they offer a free 14-day trial that allows you to do just that.

And get this: the trial includes their Elite plan, along with unlimited speeds and unlimited data. That’s right, there’s no limits to their trial, other than the time period.

That’s almost unheard of among Usenet providers, as nearly all of them place some kind of cap on downloads or download speeds for trial users.

You’ll be able to test connection speeds and download to your heart’s content for two full weeks before deciding whether XSNews is right for you – and which plan you’ll choose, whether it’s the Elite package or something a little cheaper.

XSNews' free trial has no limits. That's almost unheard of!​

Where XSNews Really Impressed Us

In our time with XSNews, there were quite a few things that left us impressed. Here’s a few.

As we pointed out above, XSNews’ Elite and block packages provide users with basically unlimited speeds, with a theoretical cap of 800 Mbit/s! Compare XSNews vs Eweka, another popular Netherlands-based newsgroup provider, where the fastest plan caps out at 100 Mbit/s.

And while there are a few other Usenet providers which boast unlimited speeds, that’s XSNews’ primary focus, meaning they’re able to actually deliver on that promised bandwidth. It’s one of the fastest Usenet services we’ve tried, especially for Europe.

One of the Most Affordable Usenet Providers

XSNews is already inexpensive but when combined with our XSNews coupon, they are hands down one of the cheapest Usenet providers on the market, especially compared to their top European competitors, like Eweka.

XSNews is also less expensive than top US-based competitors, like Newshosting. Though, to be clear, Newshosting – and many other Usenet services – throw in a free VPN and newsreader for just a couple more dollars per month.

But the fact remains that XSNews’s overall price is still cheaper. And price counts, especially month-over-month.

And XSNews’ pricing is even more impressive when you consider you’re getting both unlimited downloads and unlimited speeds.

Everyone’s Usenet needs are different. Some users go through terabytes of data, while others just want to download a few gigabytes here and there.

That’s why we love that XSNews provides both monthly and block plans. If you’re a regular user and don’t already have a Usenet provider, the monthly plans are the way to go, as they’ll give you unlimited downloads for a low monthly or yearly payment.

But if your usage is a little less regular or you’ve already got a Usenet newsgroup provider, block plans can be awesome. You only pay for the data you need, whether it’s 20GBs or 1,000. And XSNews’ block packages never expire, meaning you can use up your data allowance as slowly as you like. That makes them a great backup provider for filling in those pesky incomplete items.

All in all, XSNews has done a really good job putting together their plans and providing users with options. We’re confident that you’ll be able to find something that’s “just right” for your needs and usage style.

Servers in the Netherlands

XSNews is based in the Netherlands, and (surprise surprise) their servers are too. This is great news if you’re living in Europe, because that close proximity compared to the US gives your download speeds a boost.

This is not-so-good news if you’re living outside of Europe, specifically North or South America, as we’ll talk about later in the review.

If you haven’t noticed, we’re pretty passionate about privacy and security here at Cogipas. And that’s why we love the fact that XSNews allows users to pay anonymously, whether with Bitcoin or prepaid cards.

This enables you to further separate your identity from your newsgroup activities, letting you download from Usenet in total anonymity (granted you’ve got everything else in place, like a strong VPN). We’d love to see anonymous payments become the norm within the Usenet industry, but for now only some providers accommodate them – and fortunately, XSNews is one of them.

There’s not much to complain about with XSNews, especially if you’re based in Europe. But we still need to point out their shortcomings. Here they are.

Retention is Lower than Most Providers

XSNews offers 1100 days of retention, which is lower than many of their competitors, including Eweka, which promises almost triple the retention at 3124 days. This means that files became unavailable more quickly on XSNews – though 1100 days is still over 3 years!

To be fair, we should point out that this lower level of retention is intentional on their part. XSNews’ analysis showed that 97% of the content downloaded from Usenet was less than 1000 days old. For this reason, they decided to focus on achieving the best possible speeds rather than the highest retention.

XSNews has decided to focus on speed rather than retention

If we again contrast XSnews vs Eweka, sure Eweka may provide impressive retention, but their speeds (and number of connections) don’t really compare to XSNews. In the end, it’s up to you to decided which is more important for your needs and usage style.

News Servers Only in Europe

If you’re in Europe, specifically the Netherlands, XSNews provides virtually unbeatable speeds. But if you’re not in Europe… well, the speeds won’t impress you.

For North American users (and South American too), XSNews is simply not able to keep up with the speeds offered US-based providers, such as Newshosting or Giganews. And those services also have servers in Europe, so it’s not like it’s an either-or kind of deal.

In short, if you’re in Europe, XSNews is a great option and you’ve got nothing to worry about. If you’re in North or South America, XSNews might be better served as a backup. And XSNews is still a decent option for folks in Africa, the Middle East, and even parts of Asia.

Support is Geared to Dutch Customers

It’s a small beef but we should also point out that not only are XSNews’ servers geared towards Dutch users, their support and documentation are too.

XSNews caters more to customers in the Netherlands

They do have an English website, some English support information, and support staff who speak English, but it’s simply not as extensive as their Dutch support or the support of more English-oriented providers. And that makes sense for them, of course.

But non-Dutch speakers might find it less than ideal, especially if you’re not-so-comfortable with English either. XSNews makes up for this somewhat with its Live Chat and phone support though, which are both good.

Number of Connections Could Be Higher

XSNews provides anywhere from 8 to 30 connections, depending on the plan. And while that’s not terrible, it’s not quite as good as some other providers, like the up to 60 connections provided by Newshosting and EasyNews.

You don’t necessarily need that many connections and XSNews is able to deliver impressive speeds without them, but it’s always nice to see more. Though, in their defense, XSNews does provide more connections than some of their Netherlands-based competitors, like Eweka (8) and Extreme Usenet (20).

No Included VPN or Newsreader

We always recommend using a VPN when downloading from Usenet. And for that reason, it’s always nice when Usenet providers include a free VPN with your subscription, which is becoming more and more common these days. Unfortunately, XSNews is not one of them. Bummer.

And they don’t provide a free newsreader either. While there are plenty of free newsreaders to choose from, it’s another thing we always prefer to see included in a Usenet subscription, since it’s a nice added value and minimizes hassle for new users.

That was a lot of information to digest! Still not quite sure whether XSNews is right for you?

Here’s the tl;dr version. If you’re based in Europe, XSNews is hard to beat. They provide great speeds and a good number of connections for an excellent price, even if their retention looks a little lacking at first glance.

If you’re in the US, South America, Australia, etc., there are definitely some other options to consider. If you fall into that category, check out our top best Usenet providers. But consider a XSNews block account as a solid backup provider (remember the Gigs never expire and you can carry them forward).

Of course, there’s no need to give yourself a migraine thinking about it. Their 14-day free trial is awesome and will give you all the time (and data) you need to see what they’re all about – and it’s risk-free.

And we’re even able to provide our users with an exclusive discount. Just enter the XSNews coupon code COGIPAS at checkout and get an extra 30% off your subscription. What are you waiting for? Sign up today!

Click on the image to visit and apply the XSNews coupon now!

Newshosting vs Giganews: Which Should You Choose? (Updated)

TweakNews Usenet Review: Is It Good?