A round-up of free and open source encryption software to serve as TrueCrypt alternatives and replacements. 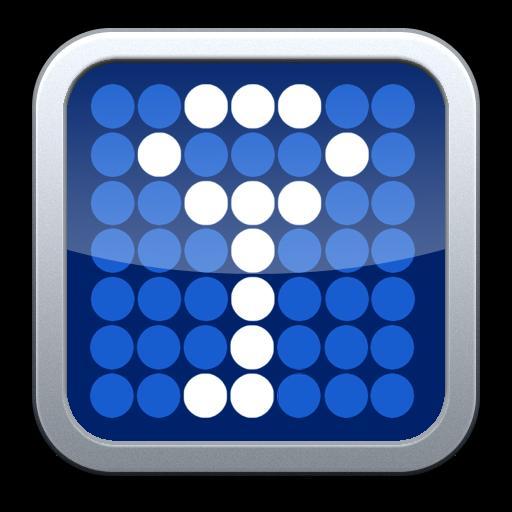 TrueCrypt is (or was?) one heck of an encryption app. Its wide range of features, from creating hidden encrypted volumes to setting up encrypted – and even hidden – operating systems, helped it to build an almost cult-like following among the privacy conscious. We count ourselves among them.

But TrueCrypt’s fans were left reeling, when its developers announced they’d no longer be supporting the app – and wouldn’t trust a third-party to maintain it.

The software still works well – heck, one of us still uses it daily on a Windows7 laptop. But TrueCrypt hasn’t been updated in years. At this point, don't hold your breath that it ever jump backs to life.

That means users who really take their privacy seriously are going to need a TrueCrypt alternative.

But which software can compete with TrueCrypt’s functionality? And more importantly, which encryption apps can you trust with your data?

Those same questions inspired us to research the best TrueCrypt alternatives around.

But enough with the intros. Let’s dive in.

Why it's Important to Encrypt your Private Data

For those of you that may need reminding, let's back up for a second. If you are already convinced about the importance of encryption, jump to the next heading.

Think of encryption like having access to an impenetrable safe for which only you have the combination. You can use it to keep your sensitive information – be it financial information, medical records, your personal downloads stash - private and secure.

Encryption is the process of converting information into an unreadable form (called a cipher) that cannot be understood unless a decryption key is applied to the cipher; in more layman terms, the scrambling of data to make it readable only by someone in possession of the proper decryption key (usually a password or passphrase).

Encryption is like having an impenetrable safe that only you have the key for.​

The best way to lock down your files and downloads and keep them from prying eyes is to use powerful encryption software. TrueCrypt was perfect for that and so are the TrueCrypt alternatives and replacements outlined below.

So, whether you want to simply keep the contents of your computer or laptop safe in the event it is lost, stolen or hacked or you want to keep your business' trade secrets safe from industrial spies, or you have just lost trust in our Big Brother surveillance society, everyone these days should seriously consider using encryption.

And remember always to use strong passphrases! The protection offered by your encryption software is only as strong as the passphrase you use for it.

Before we start listing specific encryption software, let’s talk about something they all have in common.

They’re all free open source software (FOSS for short). The important thing to know about open source software is that its code is accessible or open to anyone who wants to take a look. By opening themselves up and inviting people to look under the hood, this means you can have a heightened sense of trust.

In contrast, proprietary software – like Windows’ built-in disk encryption, BitLocker – doesn’t offer the same transparency. They can easily hide “backdoors” including at the insistence of government agencies like the NSA. This would allow malicious government agencies or other potential adversaries to access your data. In fact, a backdoor can quickly make your encryption efforts mostly worthless – and you wouldn’t even know about it.

While open source software certainly isn’t perfect, any backdoors or malware would be quickly detected by fellow coders, developers, or enthusiasts pouring over the code themselves.

In short, make sure to stick to open source software for your privacy needs.

Is it an Alternative to Keep Using TrueCrypt?

Of course, there’s really nothing stopping you from continuing to use TrueCrypt. Just keep in mind that it hasn’t been updated in several years, and the last full audit of the software was in 2015.

But that's not necessary. Fortunately, you’ll find at least one of the TrueCrypt alternatives below capable of fulfilling your encryption needs.

Whether you’re looking for a TrueCrypt replacement or you’re simply in the market for the strongest encryption software on the web, these are your best bets.

Did you love the original TrueCrypt? Then this next encryption tool might be right up your alley.

It’s based on TrueCrypt’s code, thought the developers claim they’ve actually improved upon it – and shored up some of the existing security issues. And unlike TrueCrypt, VeraCrypt is constantly being updated.

VeraCrypt can even convert TrueCrypt volumes, along with supporting AES, TwoFish, and Serpent encryption ciphers. Plus, you can create hidden volumes, just like TrueCrypt.

Another thing we love is how easy VeraCrypt is to use. It may not be the most flashy software (neither was TrueCrypt!), but it makes up for that with its usability. It’s also easier on the resources, since it only decrypts files when they’re needed.

VeraCrypt is free and available on Windows, Linux, and OS X.

Overall, VeraCrypt is probably the closest successor to TrueCrypt you can find. 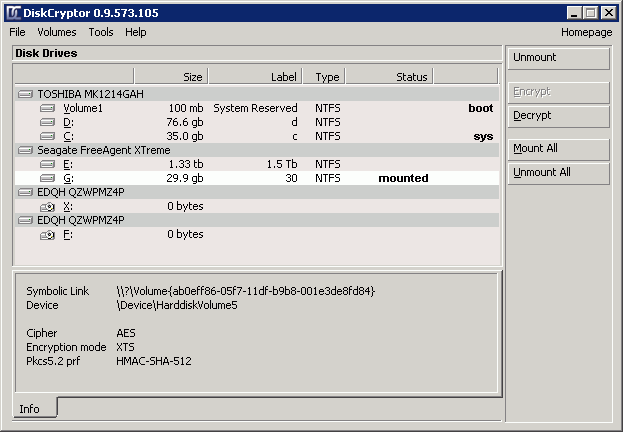 DiskCryptor is another encryption tool that we find remarkably similar to TrueCrypt.

Though, unfortunately, you’re not able to take advantage of hidden volumes, and you can’t encrypt individual files or folders either – two features TrueCrypt users grew to love.

But it does allow full disk encryption, including hard drives or partitions. In fact, you can even encrypt your OS disk (though DiskCryptor is Windows exclusive).

Drives can be mounted or unmounted, but you can still see the unmounted drives, which would be easily remedied with the ability to hide disks – but DiskCryptor doesn’t offer that feature, as of now.

On the plus side, DiskCryptor has a tiny setup file, meaning it’s easy to transfer or store. We consider it another strong contender when it comes to TrueCrypt replacements.

AxCrypt is another TrueCrypt alternative

One of the things we love about AxCrypt is how well it works with Windows. Encrypting a file can be as easy as right-clicking on it. Or you can select groups of files or a whole folder, click, and boom, they’re all encrypted at the same time.

But really, that’s part of the charm, since AxCrypt is designed to be straightforward. Its focus is file encryption and file encryption only, ditching options like encrypted volumes and drives to focus on the essentials. AxCrypt doesn’t use the most sophisticated encryption either (128-bit AES encryption only) – but while that means your files aren’t as secure as they could be, they’re still pretty safe, plus easier to access.

Finally, AxCrypt is both free and open source, which we definitely can’t complain about. You may notice that they also have a premium version on their website and you may worry whether it really is open source. Rest assured, it is! Check out this discussion which explains it nicely. 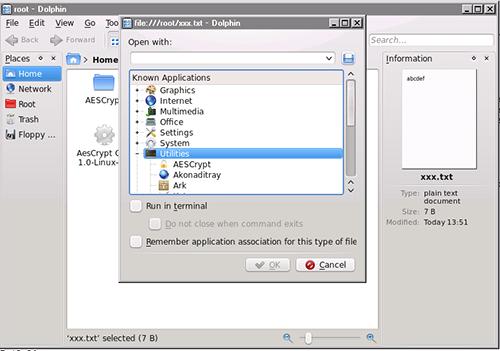 AES Crypt is a free, open source TrueCrypt replacement
(select to zoom in)

AES Crypt is similar to AxCrypt, but it does come up short in a few ways. For starters, it doesn’t allow you to encrypt multiple files at the same time.

On the flip side, it actually exceeds AxCrypt in a few ways. For example, it allows for more robust encryption, with 256-bit AES being the standard. It’s also Java-based and compatible with a much wider variety of operating systems, including Windows, OS X, and Linux.

Whether AxCrypt or AES Crypt is better for you will depend on your circumstances. Want stronger encryption? Try AES Crypt. Want faster encryption? Go with AxCrypt. Unless, of course, you’re using something other than Windows, which limits you to AES Crypt.

Yep, 7-Zip is open source. It is also one of our favorite free file archivers. In fact, chances are you may already have it installed on your computer.

But not a lot of people know that 7-Zip also doubles as pretty darn good encryption software. You can encrypt your files at the same time you’re archiving them, creating password-protected .7z or .zip archives in the process.

This can be done with single files or whole volumes, with 256-bit AES encryption to boot, but you won’t be able to encrypt entire disks.

7-Zip is also Windows-only, though like AxCrypt, it integrates really well with the OS, allowing you to encrypt files as easily as right-clicking.

While not as fully featured as some of the other offerings, we like that 7-Zip kills two birds with one stone, allowing us to handle encryption and archiving/unzipping with one piece of software.

There you have it: five, count ‘em, five, of the best free open source encryption software offerings on the market. And we think you’ll find that we’ve provided choices that fit every type of user.

Are you serious about your encryption? Do you want a full range of features, including things like hidden volumes? Then VeraCrypt or DiskCryptor are worth a closer look.

Whereas users who want something a little more streamlined but less feature-rich will probably be more comfortable with AxCrypt or AES Crypt.

And if you’re a no-frills, minimalist kind of tech user, you can’t go wrong with 7-Zip, which gives you multiple functions in a single package.

We Repeat: Use Only Open Source Solutions 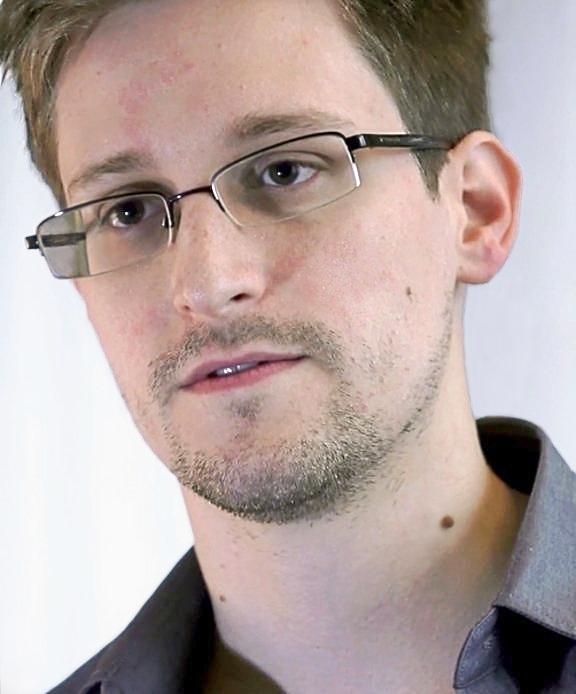 Don't forget what I taught you!

If you prefer to seek out a different TrueCrypt alternative from those we listed above, that's fine but please make sure you use an open source solution. As the Snowden leaks showed, proprietary software is at risk of having secret back doors inserted into them under pressure from outside agencies.

As we mentioned at the outset, open source means that the underlying software code can be looked at and examined by anyone who wants to. Remember also that sometimes you'll see it referred to by the acronym FOSS which stands for free & open source software.

Although it's not a 100% guarantee, software that is open source is much less likely to have any back doors, vulnerabilities or malware. That's because fellow coders, developers and enthusiasts will have looked over the code for any such vulnerabilities of flaws.

The opposite of open source software is proprietary software. Sure, Windows comes with its own built-in disk encryption BitLocker, but it may have backdoor vulnerabilities. Because the BitLocker code is “closed” it hasn't been subject to the public scrutiny.

And it's the same story with “best selling” propriety disk encryption software packages like Cypherix. Better to stick with the FOSS solutions we listed above.

If, like us, you loved TrueCrypt, don't despair about it being discontinued.

As we’ve seen there are some good free and open source (FOSS) TrueCrypt alternatives available. Others may choose to just keep on trucking and continue to use TrueCrypt.

Whatever you decide to do, we always recommend that you use open source alternatives as they are vastly superior and trustworthy than any proprietary encryption you may be considering.

Hey! – Now that your computer's data files and hard drives are protected with strong encryption, why not do something similar for your Internet connection to protect your online activities. A virtual private network service (or VPN for short) will hide your IP address from snoops and encrypt your entire Internet connection so not even your own ISP can see what you are doing online.

Check out the best VPN services »

[…] TrueCrypt (free & open source) will not be developed further, but the last stable version, version 7.1a, still works fine. TrueCrypt remains one of the best disk encryption apps around.(If you are hesitant for any reason, some alternatives are listed below under ‘File & Drive Encryption'). Read this first. […]