How to Use Couch Potato, SABnzbd and Sickbeard

Wondering what Usenet newsgroups are all about and what they are? We got you covered.

Usenet is not well-known, but once you get the hang of it, it is an easy and abundant source of information and especially downloads, including audio, documents, images and videos of all kinds.

If you are a Usenet beginner, below we'll give you a quick overview from newsgroups, to newsreaders to NZB search.

Quickly learn how to enjoy all the benefits (and downloads) of Usenet newsgroups while staying protected and safe.

'What are Newsgroups?' contents (select to expand)

At a Glance: An Overview of Usenet

The face of Usenet has changed a lot over the years. Usenet has been around for ages, since about 1980, but the way it's used has evolved with the times.

To a complete newcomer, Usenet can seem rather complicated. Usenet was one of the first Internet-based bulletin board discussion systems, but it is still much in use, despite the rise of social media and torrent file-sharing.

While you can use Usenet as it was originally envisaged – as a collection of plain text discussion groups - the big benefit of Usenet these days is to use it as a way to download files such as images, audio and videos.

With some new tools, Usenet can even operate a lot like torrents and be a full-fledged substitute for torrent file-sharing but with a number of privacy advantages.

But first, let's back up a bit and take things from the start. Later in the post, we get into an introduction to Usenet downloading.

Usenet: From the Beginning

You may not have heard of Usenet

In fact, in many circles, Usenet is thought to be a bit archaic.

But it isn’t. In fact, it’s as popular as ever and its popularity is increasing, particularly because of the privacy advantages it offers.

Let’s first learn about the basics of Usenet.

About Usenet, Newsgroups and Downloading Posts

Usenet is a collection of newsgroups and can be understood as another standalone element of the Internet with its own protocol, as with the web, email or torrents.

Usenet still represents somewhat of an untamed frontier as it has a completely decentralized structure.

It is akin to a huge database that is continually on the move between the thousands of servers hosting its contents (a mass of newsgroup messages).

Like other elements of the Internet, Usenet requires software to interact with it (called a newsreader) and has its own terminology.

Accessing Usenet is somewhat analogous to email except that each Usenet “inbox” and its messages are available to anyone with access to the news server for both reading (downloading) and sending (uploading or posting).

There are many thousands of these Usenet “inboxes” (newsgroups) in total, one for every conceivable topic of interest.

The email analogy also generally applies to how you go about reading and sending messages except that Usenet messages are received from and sent to a newsgroup’s address rather than to a specific user or email address.

In addition, you can download (and post) messages from (and to) newsgroups that include file attachments, called binaries in Usenet speak.

In fact, there is a binary group for almost any subject you can think of. 🙂

Introduction to How Usenet Newsgroups are Organized

Newsgroups are organized in a hierarchy.

Similar to domain names for websites, the components of a newsgroup name are separated by dots (.). The first segment of the name is how newsgroups are categorized.

The traditional categories of the Usenet hierarchy (the older, more news-like newsgroups) are categorized as follows:

However, you may not be as interested in these categories as you are in the alt. hierarchy which stands for alternative.

The alternative genre of Usenet is often where lots of interesting, different and off the beaten track things can be found. Many people are specifically interested in the alt.binaries.* newsgroups, the newsgroups that contain the most media items.

Some of these newsgroups can be controversial, including for copyright issues or adult content.

For example, though some Usenet newsgroups are accessible via Google (see https://groups.google.com/) and other free online portals, they usually only cover the traditional categories mentioned above. If they include alt newsgroups, the access will usually be limited to ‘text only’ alt newsgroups and not any of those carrying binaries.

Wanting to access Usenet for its treasure trove of media files means signing up with a premium Usenet provider.

Furthermore, you will need an app called a newsreader (free) to find the newsgroups that interest you, subscribe to them and download the specific posts and file attachments that you want.

Downloading from Usenet can be a manual process: you seek out files based on the name of posts or even the newsgroup(s) they are posted to.

But some of the better Usenet providers and/or newsreader apps have features to help you with all the manual aspects.

You simply visit newsgroups that interest you – whether based on their name or recommendations you read about – and the browser interface will generate thumbnails of the images and videos available. 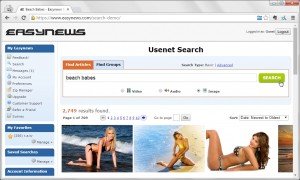 This can help save you a lot of time compared to downloading a subset of files to check and decide whether or not to download more of the same.

Some newsreader apps have similar features built-in such as Newshosting‘s Usenet Browser app.

An NZB lets you find certain content (for example audio, image or videos) you're looking for without having to know or even care about all the details such as the newsgroup or even the posts in which the files are contained.

You just find an NZB for the content you want, open it in your newsreader app and presto it downloads to your computer or device. If that sounds a lot like torrent file-sharing it is similar, but with some important differences.

Wanna know more? To see if the type of content you are interested in is available in Usenet, search newsgroups to see what you may be missing or try searching some NZB indexes.

Downloading torrents means joining a swarm, downloading the content on a “two way” basis, both from and to the swarm. This means your IP address is shared with others, some of whom may be downright unfriendly.

In fact, some members of the swarm may be joining it for the purposes of monitoring what you and other torrenters are downloading.

No one else is involved or knows what you are doing.

Even your ISP will not be able to confirm you are downloading from Usenet, if you are using a secure SSL connection to your Usenet provider (all the good providers have them).

Your ISP will see that you are downloading lots of data but that could just as easily be you downloading high definition photos from your cloud storage or restoring backed up data from the cloud.

(Using a virtual private network with Usenet will also hide your newsgroup downloading).

Usenet download speeds are also generally faster, often much faster than torrent file-sharing. That's because your entire connection can be utilized for the Usenet download.

For more details about the differences, read about the pros and cons of Usenet versus torrent file-sharing

The best way to discover and explore Usenet newsgroups is to jump in.

Our recommended Usenet providers offer free trial accounts, so you can try Usenet risk-free first and see if it's for you.